(Note: This post was written by our blog administrator, Jason Crane, host of The Jazz Session) 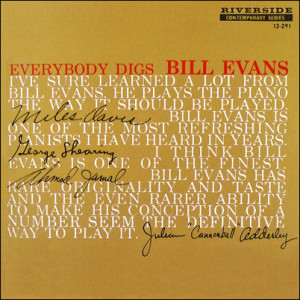 Everybody digs Bill Evans. I mean, it’s right there in one of his album titles. Not me, though. As a teenager, I really tried. I listened to Bill Evans with his own bands, solo, with Miles and with Cannonball and with Oliver Nelson. I just didn’t get it. What was it about this guy that everybody dug? At that point in my life, I was into flashier playing, having gone through high school on a diet of prog rock like Yes, ELP, Rush, Genesis and King Crimson. Evans was too light, too airy.

In 1994 I moved to Tucson, Arizona, where I started playing music professionally. I also started borrowing armloads of CDs from the public library across the street from my tiny studio apartment. My apartment had a bed, a small table, two chairs, and the most important thing of all, a stereo system. I would sit for hours listening to music. One afternoon in early ’95, I brought home a copy of Sunday At The Village Vanguard, figuring I’d give Evans another shot. It was free, so I had nothing to lose.

I sat there on the floor in front of the stereo, soaking up the sound as Evans, Scott LaFaro and Paul Motian played “Gloria’s Step.”

Suddenly, like the tumblers in a lock clicking into place, I got it. Evans’ touch on the piano, his chord choices, his phrasing, the almost telepathic interplay of the trio — it all hit me like a wave washing over the beach. I’ve never been the same, and now, like everybody else, I dig Bill Evans.