Join Yoko Miwa & Sheila Jordan In Concert – And At A Master Class!

Join Yoko Miwa & Sheila Jordan In Concert – And At A Master Class! 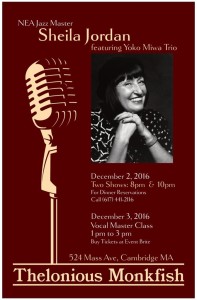 Then the next day…

MASTER CLASS WITH SHEILA AND YOKO

Get your tickets for the master class today!

Sheila Jordan is not only one of the premier singers in jazz, she is also in demand worldwide for her stimulating vocal workshops. A superb scat singer, Sheila received the Jazz Masters Award 2012 from the National Endowment for the Arts – the highest honor in jazz music in America. Upon moving to New York City in the early ’50s, Jordan sang in clubs and at jam sessions with some of the city’s jazz giants, including Charles Mingus, Herbie Nichols, and Charlie “Bird” Parker. She also studied with the renowned Lennie Tristano. In 1952, she married Parker’s pianist, Duke Jordan. Ten years later, she made her acclaimed first recording, showing her vocal finesse on a ten-plus minute version of “You Are My Sunshine” on George Russell’s album The Outer View. Thanks to Russell, she released her first album, Portrait of Sheila, on Blue Note, the first female vocalist to record for the label.

Sheila will offer vocal jazz wisdom and stories of her life in jazz, accompanied by Yoko Miwa on piano. If you’d like to avail yourself of Sheila’s advice, bring a lead sheet and be prepared to present a song.