Ben Webster was a giant of the saxophone. One of the key practitioners of swing-era sax playing, he stayed true to his music even as the world moved on and his style of playing fell out of favor. The 102nd anniversary of his birth was on March 27.

If you’re like me, you know Ben Webster’s name and have heard some of his playing, but perhaps you haven’t really dug into the rich vein of music for which he’s responsible. There are some great places to start. For example, his time in The Ellington band. Bassist Jimmy Blanton was in the band at the same time, and their impact was so outsized that this era is referred to as the Blanton-Webster band. There’s a great boxed set capturing this era. Here’s a sample: 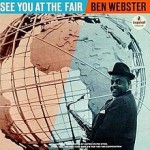 The other day I discovered another Webster gem, this one from later in his career. See You At The Fair was recorded for Impulse in 1964, well after swing had faded from the popular imagination. This was Webster’s last American album. He moved to Europe soon after, where he was more appreciated. There’s some killer playing on this record, including a wily piano solo on the title track by Roger Kellaway. Check it out:

There’s so much more where this came from. Got a favorite Ben Webster track or album? Share it in the comments!