SHOW REMINDER: Yoko and her trio with Brad Barrett on bass and Scott Goulding on drums celebrate the release of her new recording, Pathways, at 7:30 p.m. on Friday, May 19 at The Regattabar in Cambridge. Tickets are $25, $20 for students. For information call 617-395-7757 or buy them online.

A jazz musician is by nature an explorer at heart, but it always helps to have a few fellow adventurers at your side. On her new album, pianist Yoko Miwa sets out to navigate a few new Pathways with the help of her longstanding and deeply harmonious trio. With more than a decade and a half together, the Boston-based trio showcases the unique ability to wander down diverging trails without ever losing sight of their shared destination.

On Pathways, due out May 12, 2017, Miwa is joined by bassist Will Slater (with Brad Barrett stepping in for one track) and drummer Scott Goulding. The remarkable telepathy they share has been developed over 15 years and countless hours logged on the bandstand, not to mention the accompanying personal bonds (Miwa and Goulding are married, after all).

“When we play together, it comes out as one sound,” Miwa says. “That’s the best part of working together all the time. I’m very comfortable with these guys because they know my playing and I know them very well.”

It’s been nearly five years since the release of Miwa’s last album, Act Naturally (JVC Victor), but she’s been far from inactive in the interim. On the contrary, she’s one of the busiest artists on the thriving Boston jazz scene, playing regularly at renowned local venues the Regattabar and Scullers as well as venues worldwide. Locally, the trio is a constant presence with three area residencies that keep them busy every weekend they’re at home. On Fridays they can be found at the Central Square sushi bar and jazz club Thelonious Monkfish, where Goulding serves as music director and Miwa helped select the stunning Yamaha piano. Saturdays they play at the wine bar Les Zygomates, as they have for the last 12 years, while their Sunday brunch gig at Cambridge BBQ joint Ryles dates back even further.

That impressive calendar means that the trio has had plenty of time not only to try out new material but to explore each piece over time. “We play each song a little bit differently every time,” Miwa says. “It really helps develop the music. If we only did concerts once a month in front of big audiences, I don’t think we’d feel the same way or that I’d play the same way that I do now.” 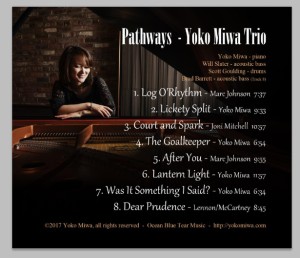 The repertoire that Miwa traverses on Pathways ranges widely, from the classic songs of The Beatles and Joni Mitchell to a pair of rarely (if ever) reprised pieces by legendary Bill Evans Trio bassist Marc Johnson, originally recorded solo. The album’s highlights, though, are Miwa’s gorgeous originals, which combine lively melodies, a delicate touch, and lush harmonies – the same qualities that she brings to her improvisations.

The album opens with the gospel-flavored chords that Miwa uses on Johnson’s “Log O’Rhythm,” and centers on the piano-bass dialogue between the leader and her “favorite bassist,” Slater, who doesn’t play with the trio as regularly since moving to New York City. The reunion here shows that the pair have lost none of their brilliant chemistry. Slater is also featured on Johnson’s other contribution, “After You,” where he agilely articulates the song’s memorably nimble melody. Both tunes have become favorites at the trio’s shows, and have received Johnson’s own stamp of approval.

Driven by Goulding’s intricate powerful rhythms, Miwa’s “Lickety Split” lives up to its title with its brisk pacing and McCoy Tyner influenced forcefulness. Falling on the other end of the sonic spectrum, “Lantern Light” begins with a movingly lyrical solo piano intro, gaining momentum as Goulding and Slater enter, capturing both the warm glow and lonely isolation of a single lamp carried through a dark night. Its fragile beauty is all the more remarkable given the fact that Miwa wrote it quickly, in a sudden burst of inspiration, during a break between students at Berklee College of Music – without a piano nearby.

The playful swing of “The Goalkeeper” was inspired by a frequent visitor to the Miwa household – their neighbors’ cat, who drops in often for a bit of food and play. His flawless ability to bat back a ball thrown by Miwa gave the piece its name, while the adorable feline has become a surrogate pet for her and Goulding following the loss of their own beloved cat. The last of the pianist’s compositions, “Was It Something I Said?” is a sly blues imbued with the wry humor of the waiter whose teasing riposte Miwa borrowed for the title.

“Joni Mitchell’s music is very beautiful and very unique,” Miwa says, two elements beautifully captured in the trio’s version of “Court and Spark,” which luxuriates in the songwriter’s compelling harmonies. The album ends with a melancholy take on the Beatles classic “Dear Prudence,” which features the trio’s current Boston bassist, Brad Barrett. “Everybody knows the Beatles’ songs very well, so you don’t want to change them too much and upset their fans,” Miwa says with a laugh. “’Dear Prudence’ is very simple but very powerful.”

Integral to capturing the heartfelt communication forged by the trio was Miwa’s insistence that they play together in the studio, not divided into isolation booths. Their spontaneity and spark found an ideal setting at Wellspring Sound Studios in Acton, Massachusetts, where they worked closely with engineer Matt Hayes. “It’s almost like a live recording,” Miwa says proudly. “I feel really uncomfortable separated into different rooms where you can’t really see each other. Of course you can’t go back and fix things, but I love the feeling of playing in the same room and our energy together.”

That energy is infectious, and sure to entice audiences to follow along whatever new Pathways Miwa and her stellar trio choose to head down next.