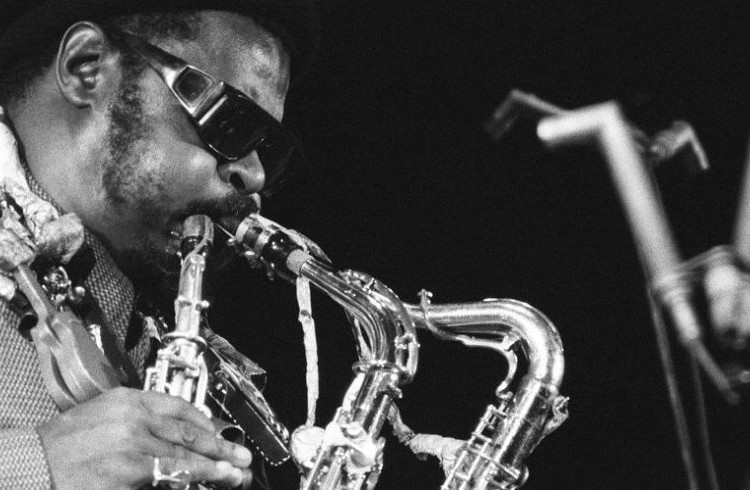 (Some thoughts from our webmaster, Jason Crane.)

Rahsaan Roland Kirk would have turned 83 earlier this month. He left us far too soon, but he also bequeathed to us an amazing collection of performances that people will be returning to for as long as people listen to music.

My appreciation of Rahsaan has deepened over the years. I first started paying attention to him about 20 years ago when I was living in Japan and saw some concert footage of one of his shows. Like anyone would be, I was immediately taken aback by the sheer amount of music he could make at one time with multiple horns, flutes, gongs, and more. As he stood there in his cool clothes and cool hat and sunglasses, he looked every inch the jazz wizard, conjuring sounds from another plane.

Later, when I was running a jazz radio station in Rochester, NY, two of my volunteer DJs were big Rahsaan fans and often played him on the show they hosted together. By then it was less about the visual spectacle and more about the sheer force of his playing. Listening to things like the live versions of “Volunteered Slavery” would take my breath away. Every time I’d think he’d hit the climax of the song, Rahsaan found another stairway to a higher heaven.

Starting on his birthday earlier this month, I listened to Rahsaan’s entire recorded output, studio and live recordings, in chronological order. It was an eye-opening experience, or more like a third-eye-opening experience. Rahsaan’s between-song patter in the live shows says it all. He recognized all kinds of black music as having worth, and ascribed that same worth to black people themselves. And he celebrated all of it, from the compositions of John Coltrane to the soul and R&B hits of the day. Rahsaan was the whole picture: a musician whose deep belief in the interconnectedness of all things poured out of him through his many instruments.

If you’ve never listened to Rahsaan, there are many great entry points, though I think the album Blacknuss would be my suggested beginning.

And finally, I recorded my own little tribute to Rahsaan on his birthday. I hope this isn’t self-serving, but I can tell you that it’s heartfelt. Bright moments!