Sheila Jordan Returns To The Mad Monkfish On Dec. 6 & 7!

Sheila Jordan Returns To The Mad Monkfish On Dec. 6 & 7!

“Ms. Jordan is what they call a musician’s singer, sure of phrase and light on her feet.” — The New York Times

Raised in poverty in Pennsylania’s coal mining country, Sheila Jordan began singing as a child and by the time she was in her early teens was working semi-professionally in Detroit clubs. Her first great influence was Charlie Parker and, indeed, most of her influences have been instrumentalists rather than singers. Working chiefly with black musicians, she met with disapproval from the white community but persisted with her career. She was a member of a vocal trio, Skeeter, Mitch And Jean (she was Jean), who sang versions of Parker’s solos in a manner akin to that of the later Lambert, Hendricks and Ross. After moving to New York in the early 1950s, she married Parker’s pianist, Duke Jordan, and studied with Lennie Tristano, but it was not until the early 1960s that she made her first recordings. One of these was under her own name, the other was The Outer View with George Russell, which featured a famous 10-minute version of “You Are My Sunshine.” 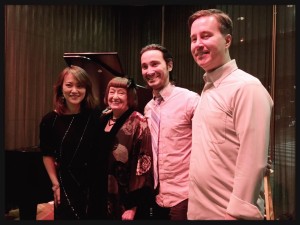 In the mid 1960s Jordan’s work encompassed jazz liturgies sung in churches and extensive club work, but her appeal was narrow even within the confines of jazz. By the late 1970s audiences had begun to understand her uncompromising style a little more and her popularity increased—as did her appearances on record, which included albums with pianist Steve Kuhn, whose quartet she joined, and an album, Home, comprising a selection of Robert Creeley’s poems set to music and arranged by Steve Swallow. A 1983 duo set with bassist Harvie Swartz, Old Time Feeling, comprises several of the standards Jordan regularly features in her live repertoire, while 1990’s Lost and Found pays tribute to her bebop roots. Both sets display her unique musical trademarks, such as the frequent and unexpected sweeping changes of pitch, which still tend to confound an uninitiated audience. Her preference to the bass and voice set led to another remarkable collaboration with bassist Cameron Brown, whom she has been performing with all over the world for more than ten years so far and they have released the live albums I’ve Grown Accustomed to the Bass and Celebration. Entirely non-derivative, Jordan is one of only a tiny handful of jazz singers who fully deserve the appellation and for whom no other term will do. Jordan continues to make creative, important music and inspire new generations of jazz artists. In 2012 she received the highest honor in jazz – a Jazz Masters Award from the National Endowment for the Arts in 2012. 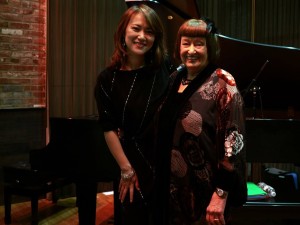 Born in Kobe, Japan, pianist Yoko Miwa was trained classically and didn’t become immersed in jazz until she began studying with Minoru Ozone, the late keyboardist, educator and club owner, and the father of pianist Makoto Ozone. Miwa describes the elder Ozone as an “old-school” teacher who instilled in her the importance of playing by ear and absorbing jazz’s language by listening and transcribing. She was employed as an accompanist and piano instructor at his music school, and a waitress at his popular jazz club—where she cut her teeth performing, sometimes off the cuff at Ozone’s request. She enrolled at the Koyo Conservatory of Music and, on a whim, auditioned for a full scholarship prize at Berklee College of Music and won first prize. Once in Boston in 1997, she fell in love with the city and dug into her jazz education. After graduation she became an accompanist and a Professor in the Piano Department. A Yamaha Piano Artist, Miwa has performed and/or recorded with luminaries including Esperanza Spalding, Terri Lyne Carrington, Arturo Sandoval, Sheila Jordan, Slide Hampton, George Garzone, Jon Faddis, Jerry Bergonzi, Johnathan Blake and John Lockwood. As a leader she has recorded eight albums, including her acclaimed Japanese debut for JVC Victor Entertainment, 2012’s Act Naturally, which was promoted with a concert tour of Japan. Other career highlights include a spot in the Jazz at Lincoln Center program “Marian McPartland & Friends,” part of the Coca Cola Generations in Jazz Festival, and a performance in Lincoln Center’s annual Jazz and Leadership Workshop for the National Urban League’s Youth Summit. She has also acted as a panelist for the National Endowment for the Arts. Her latest release Keep Talkin’ reflects Miwa’s thriving jazz-life-in-progress—her still-evolving work as a player and composer, her relentless search for new songs and her tireless live-performance ethic, which has allowed her and her band to entertain generations of jazz fans.

About the Jazz Baroness Room at The Mad Monkfish

Jamme Chantler opened The Mad Monkfish (formerly Thelonioius Monkfish) in 2011 and has since presided over its growth and expansion. When the clothing store that shared a wall with the restaurant moved to a new location, Chantler took over the lease and built what is now called the Jazz Baroness Room. The new space, which opened in September 2015, was clearly designed with live performances in mind. At the front of the room, overlooking Massachusetts Avenue, is a spacious stage; a beautiful, seven-foot grand piano resides on one end. More than a dozen tables with comfortable leather chairs occupy the center of the room. Toward the rear is an L-shaped bar with a sleek marble surface and colorful backlighting. The appearance is modern and meticulous, but it feels relaxed. Exposed brick adds a bit of vintage charm, while dark wood paneling fosters a home-like atmosphere. Chantler is involved in every aspect: the food and cocktails, design of the room, blogging and social networking, customer service, and branding. He is no small part of the key to the success of Monkfish, being owned by someone who cares very much and is actively involved in its operation.