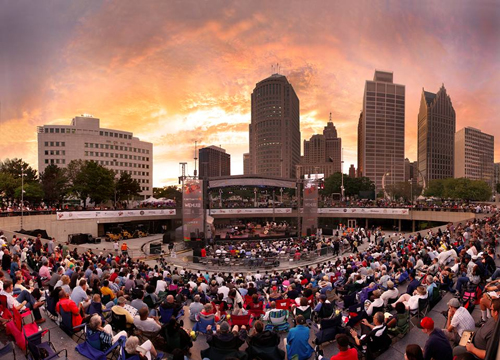 The Detroit Jazz Festival is a free jazz festival held every year during Labor Day Weekend at Hart Plaza and Campus Martius Park in Detroit, Michigan. It’s one of the biggest jazz festivals in the world which is free to the public. The festival was still planning to go on as usual while Newport, Montreal, Monterey, and other major jazz festivals canceled a while back. The bad news is it won’t go on as usual but the good news is it won’t be canceled. Instead the 2020 Detroit Jazz Festival will be going virtual, as concerts will be held behind closed doors. Enjoy live, in-studio performances on TV, on radio and online September 4-7. Catch it all on Facebook Live, YouTube, and Instagram. In the Detroit metro area on WDET 101.9 FM, WEMU 89.1 FM, Detroit A&E Channel 22. Select performances on Detroit Public Television and WRCJ 90.9. There’s even a Detroit Jazz Fest LIVE! app. There’s a great lineup of performers! More details here: https://www.detroitjazzfest.org