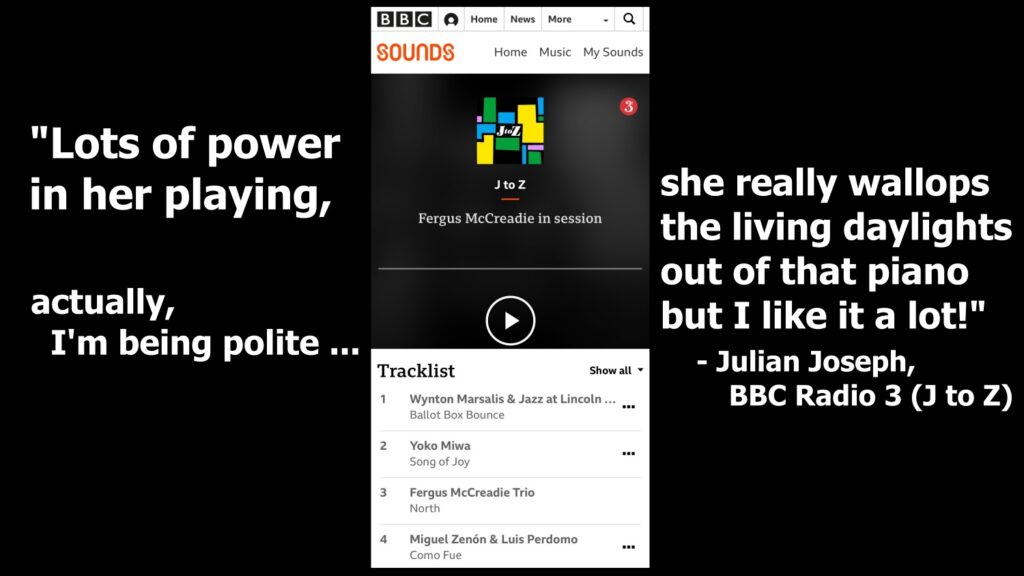 Listen to Song of Joy on BBC 3 (starting at 5:55) I love how the host described my playing!

“lots of power in her playing, actually I’m being polite she really wallops the living daylights out of that piano but I like it a lot.”  – Julian Joseph, BBC Radio 3 (J to Z)

DownBeat magazine features a beautiful article in the new March issue and I hope you will pick up a copy!

“Remarkably, Miwa emerged from those first months of the pandemic with a new recording by her trio, her ninth, which, given the circumstances is remarkably upbeat and affirmative, living up to the album’s title, Songs of Joy (Ubuntu Music).” – Jon Garelick, DownBeat

CD Hotlist
“This album is yet another triumph from one of America’s finest jazz pianists, composers, and bandleaders.” – Rick Anderson, CD Hotlist

Musicalmemoirs Blog
“Yoko Miwa is a powerful pianist, with tenacious ties to her classical training.  Her style of playing is with one foot rooted deeply in the blues and the other in contemporary and modern jazz.  At the same time, one hand is holding onto old-school jazz history and the other is elbow-deep in international cultures.  This album celebrates life, happiness and joy.”

All About Jazz
“Miwa opens Songs of Joy with an anthemic rendition of Richie Havens’ “Freedom,” the song that launched the folk singer’s star into the heavens after his version was documented in the movie Woodstock. Miwa approaches “Freedom” with a McCoy Tyner-like muscularity, backed by the dense rhythmic back drop from bassist Will Slater and drummer Scott Goulding. It is a powerhouse, all-things-possible sound, spiritual and temporal at the same time.” – Dan McClenaghan, All About Jazz

The new complete album “Songs of Joy” will be released this Friday, February 12, and can be pre-ordered on Amazon now. You can pre-order here in Japan.