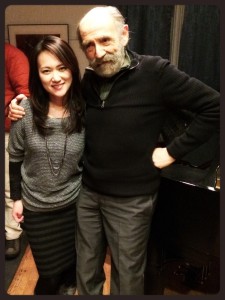 Boston is such a transient place, people come and go here all the time.

Pianist Harvey Diamond is a local legend who has lived here for 50 years, even after all that time he too is leaving — relocating to Asheville, NC.

Harvey is one of legendary pianist Lennie Tristano’s last prize students. Harvey has been recorded thousands of hours by his students and fans yet has never officially released his own recording. I can safely say that not many have heard Harvey play piano as much as I have.

The house where I live used to be a recording studio, I moved into the house after the studio went out of business along with a group of other Berklee students. It was ideal for musicians since the studio left several soundproof rooms in which we could practice at all hours. The main room of the studio has always had a piano and has been the setting for many great sessions over the years, Harvey Diamond frequently played sessions at my house so I’ve heard him play on countless occasions.

He plays the “lines” Lennie Tristano played which are essentially alternate melodies to standard jazz tunes. They are melodically and rhythmically challenging. The most impressive thing is Harvey learned them all by ear, he never reads music when he plays them. This is especially impressive given the difficulty of the lines and lack of cliches which would make them easier to remember.

Harvey once told me Charlie Parker left his legacy even in just the melodies of his original compositions, he said the melodies themselves were an insight into the way he improvised. I think the same can be said about the melodies that Tristano re-wrote over standard jazz tunes. Harvey told me some great stories about Lennie, the main thing he always emphasized was Lennie’s love for Charlie Parker.

Harvey said Lennie used to lay on the ground underneath the piano while Bud Powell played and he couldn’t believe the sound he was getting was coming from wood and metal strings! Once during one of his lessons, Harvey was leaning forward while he played (like Bill Evans) and Lennie slapped him in the chest and told him to sit up. In case you didn’t know, Lennie was blind…how did he know Harvey was slouching? I think because he was that attuned to the sound of the piano.

I attended Harvey’s last concert in the Boston area in the end of January and took this picture with him. He played wonderful as usual. I will miss seeing Harvey walking around Boston, hearing him talk about Lennie and the cats, but most of all I’m gonna miss those lines.