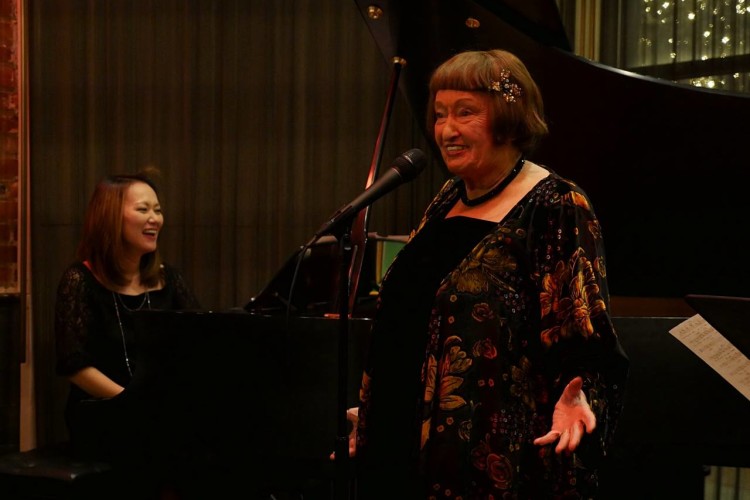 Sheila Jordan at The Mad Monkfish on 11/5 (two sets) 7pm & 9pm, tickets are $25 and food or drink purchase is mandatory. Buy tickets for 7pm set here or for the 9pm set here.

“Ms. Jordan is what they call a musician’s singer, sure of phrase and light on her feet.”
New York Times

Jordan will also present a vocal master class on Saturday, November 6 at 1 p.m. Tickets are $15-$35 and are also available at https://www.exploretock.com/themadmonkfish.

One of the most distinctive and creative of all jazz singers, NEA Jazz Master and self-described “Jazz Child” Sheila Jordan is one of those rare vocalists whose voice can be regarded among the great instruments of the music. Born November 18, 1928 and raised in poverty in Pennsylvania’s coal-mining country, Jordan began singing as a child and by the time she was in her early teens was working semi-professionally in Detroit clubs. Most of her influences have been instrumentalists rather than singers, the greatest being Charlie Parker. After moving to New York in the early 50s, she married Parker’s pianist, Duke Jordan, and studied with Lennie Tristano. She didn’t begin recording until the early 60s, then faded from view for two decades as she stepped back from her career to raise her daughter. Since her return to recording in the late 1970s she has remained one of the most acclaimed and beloved vocalists in jazz, pioneering a duo approach with solo bass and enjoying longstanding collaborations with the likes of Cameron Brown, Harvie S and Steve Kuhn and recording with the likes of Carla Bley, Roswell Rudd, Mark Murphy, Arild Andersen and George Russell.

Jordan, who turns 93 in November, continues to make creative, important music and inspire new generations of jazz artists. In 2012 she received the nation’s highest honor in jazz – a Jazz Masters Award from the National Endowment for the Arts. In 2021, Capri Records released Comes Love, an album of recently discovered recordings Jordan made in 1960.

Internationally acclaimed pianist/composer Yoko Miwa is one of the most powerful and compelling performers on the scene today. Her trio, with its remarkable telepathy and infectious energy, has brought audiences to their feet worldwide. Their latest CD, 2021’s Songs of Joy, has garnered praise for offering a beacon of optimism during dark times. The album reached #1 on the Jazz Week Jazz Charts. Her prior release, 2019’s Keep Talkin’, received four stars from DownBeat which called it “a beautifully constructed album” and noted “the drive and lyricism of a pianist and composer at home in bebop, gospel, pop, and classical.” For more than a decade Miwa’s trio has played regularly at major jazz clubs in their home city of Boston, as well as venues around the world. A favorite of Jazz at Lincoln Center, Miwa was chosen to play on “Marian McPartland & Friends,” part of the Coca-Cola Generations in Jazz Festival. Miwa also appears regularly at New York’s famed Blue Note Jazz Club as well as Birdland and has performed and/or recorded with a wide range of jazz greats including Slide Hampton, Arturo Sandoval, George Garzone, Jazzmeia Horn, Jon Faddis, Jerry Bergonzi, Esperanza Spalding, Terri Lyne Carrington, Kevin Mahogany, John Lockwood and Johnathan Blake, among others. “Yoko Miwa has been gifted with both extraordinary musical skills and the pure spirit that is necessary for great art. We love her musical gifts and her beautiful spirit as well,” says Ahmad Jamal.

About the Jazz Baroness Room at The Mad Monkfish
Jamme Chantler opened The Mad Monkfish (formerly Thelonioius Monkfish) in 2011 and has since presided over its growth and expansion. When the clothing store that shared a wall with the restaurant moved to a new location, Chantler took over the lease and built what is now called the Jazz Baroness Room. The new space, which opened in September 2015, was clearly designed with live performances in mind. At the front of the room, overlooking Massachusetts Avenue, is a spacious stage; a beautiful, seven-foot grand piano resides on one end. More than a dozen tables with comfortable leather chairs occupy the center of the room. Toward the rear is an L-shaped bar with a sleek marble surface and colorful backlighting. The appearance is modern and meticulous, but it feels relaxed. Exposed brick adds a bit of vintage charm, while dark wood paneling fosters a home-like atmosphere. Chantler is involved in every aspect: the food and cocktails, design of the room, blogging and social networking, customer service, and branding. He is no small part of the key to the success of Monkfish, being owned by someone who cares very much and is actively involved in its operation.